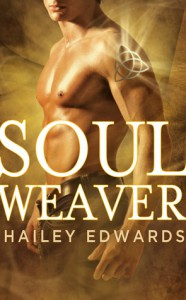 2.5 stars at most for this book. I wasn't overly impressed with the story, nor its execution. Nathaniel is a soul weaver. Once he was an angel, but he's been banished from heaven for lying about his brother's involvement with a mortal woman. After his fall, he's forced to work for Delphi, ruler of hell. His job is to collect souls of bad people (Harvest) and then weave from them a cloth that is used to make wings for the other fallen angels (the Harvesters). He knows that rule breakers are punished, but when he comes upon an accident, a pure soul calls to him. This soul, while pure and sparkling clean, has no ties to anyone in heaven, which prevents it from being seen by the angels. Realizing that his angelic, heavenly counterparts are not coming to claim this soul, and with no one to prevent her soul from being lost, Nathaniel, in a rushed decision, bonds a piece of his own soul with that of the injured woman's he finds in the wreckage.Oopsie. Shouldn't have done that. The consequences of his actions are far-reaching.Fast forward about ten months or so. Chloe McRea was supposed to die in that accident. While she suffered from social anxiety before, since being unwittingly saved by Nathaniel, she's been experiencing nightmares that have made her more or less a prisoner in her own home/bookstore. Her parents, with whom she had a close, loving relationship, have passed, and the store now belongs to her.And this is where this book has logic fail #1. If Chloe was truly in a loving parent/child relationship with her parents, and one assumes that her parents went to heaven, why then would NOBODY have any tethers to her soul? This made no sense, and that's partially where this book lost its appeal. It's a huge plot hole, from where I'm sitting, one that an editor should have caught. Subsequently, I couldn't bring myself to really care much about these characters at all. The first 2/3 of the book dragged on and on, and I was close to giving up, when finally something actually happened to move this plot forward and make this book interesting.Initially, I felt sorry for Nathaniel, and the author does a fairly good job describing his struggles in doing a job he loathes. The mythology was also interesting, and very unique. He is portrayed as someone who cares very much about family, and has a tendency to play martyr, blaming himself for the bad decisions of his kin. Not realizing that she's been giving a second chance to make a connection with someone on earth, Chloe hires a young woman to help her in the store. Neve was an interesting character - for someone who hinted at an abusive husband, she was rather upbeat in how she was portrayed, like a fighter, and seemed to quickly grow to care about Chloe, thus giving her the ties she needed to have. The villain in the story (gotta have one of those) became just a little creepy towards the end. He's obsessed with revenge and blames Nathaniel for his lot in life. His nephew, Bran, is a nephilim, and the author did a good job explaining the prejudice and bigotry that he is faced with for being half angel, half human. I didn't buy the love story, nor the sudden change in a woman who for about 75% of the book is agoraphobic. Unless it's the soul bonding at play, I didn't understand how quickly Nathaniel fell for Chloe, and vice versa. He was calling her his reason for living much too soon to make it believable without an explanation. The writing is okay, though it leaves something to be desired, and two huge logical errors didn't help to make me like this any more. About 70 pages in, Nathaniel asserts that time moved slower in Dis (the hellish place they occupy), and that 12 hours on earth equal 7 days in Dis. Uhm, no. If that were the case, then time in Dis moves FASTER than on earth. Editing fail #2. Overall, the book was okay. I liked it enough to want to read the next one, but I hope that the 2nd installment will be better in its logic. The mythology is very interesting, and has a lot of potential for further exploration.I received a free copy of this book from the publisher via Netgalley. A review was not promised in exchange.
Tweet