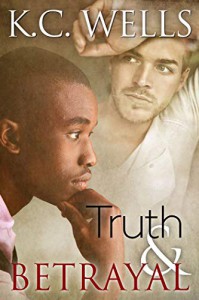 This was a tearjerker, for sure, but also a book that tackled some big issues.

Jacob is a young man living in a small town in Eastern Tennessee (close to Knoxville) and working for his daddy's construction company. His older brother Caleb left for Atlanta a few years ago and only returns home sporadically, having forged a life for himself in the big city. Jacob knows he's gay, but has no desire to come out to his parents, because he's sure of their negative reaction. He's been taking a few steps to distance himself from their church, but he knows that coming out in such a small town isn't going to go over well. His group of friends are more like acquaintances at this point, since he no longer has anything much in common with them, and the secret he's keeping isn't conducive to a close friendship anyway. Small-town bigots don't make for good friends.

Then Jacob and his parents get word that Caleb has died in a car accident, while riding in a car with another man who was also injured. And Jacob's whole world crashes down around him.

The author does a fine job describing his grief and his anger at losing Caleb, while slowly coming to the realization that he lost his big brother long before his death.

Liam is the friend who was driving the car at the time of the accident. Injured himself in the crash, he nonetheless shows up at Caleb's funeral, fully realizing that he's probably not welcome, but needing a bit of closure for himself. The reader is at this point likely aware that Caleb and Liam were more than friends, even if Jake and his parents are not. The scene at the grave - gah, that felt as if plucked from real life, and my thoughts were drawn to Shane Bitney Crone (if you don't know who that is, google his name), and how he must have felt visiting Tom's grave all alone after the fact because he wasn't welcome at the funeral either.

Going to his late brother's apartment to clean out his belongings brings Jake face to face with the secret Caleb has been keeping. And slowly Jake comes to terms with what he finds out.

This could have been icky, obviously - one MC feeling attraction to his late boyfriend's little brother, who also happens to be gay, would usually make me feel really squicked out, but the author did a fine job laying out how the relationship between Liam and Caleb wasn't one of true and lasting love, so Liam slowly falling for Jake and vice versa didn't feel weird to me. The fact that it's a super slow burn also helped with this. At first, Liam takes the place of a friend, giving Jake a glimpse into Caleb's life, meeting his friends, visiting his favorite places, and such. He becomes a confidante of sorts as Jake gets more comfortable with who he is, and who he's attracted to. It didn't feel as if falling in love with Jake was what Liam had planned for - it simply happened.

Both Jake and Liam are really likable characters, and the author drew them with complexity and flaws. Their actions and reactions made sense within the overall plot, and the dialogue felt authentic for the most part. What grated after a while was Jake's accent - he often sounded a bit too much like a country bumpkin for my taste, but that's on me, I'm sure. Jake has quite a few hurdles to clear, before he can ride off into the sunset, his mama's machinations being the least of his worries. Jake finds his backbone - and that was a wondrous sight to behold when he told off the bigot preacher. Liam's family is made from a different cloth - fully supportive, warm and welcoming, and embracing Jake for who he is.

KC Wells always delivers with the emotions in her writing, and this book is no different than what I'm used to from this author. There are heart-wrenching moments of grief and pain that made me cry, but there are also moments full of love and light, and those made me cry also. There is passion between two young men who finally found what they've been looking for, there is courage and strength in the face of adversity, and there are surprise reactions you didn't expect.

I couldn't stop reading until the very end, and this is no surprise to me at all, really - It's a KC Wells book, after all.