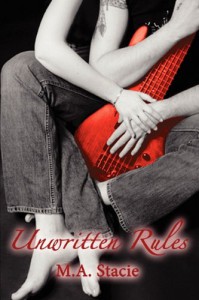 The book Unwritten Rules deals with some heavy stuff. A young man separated from his family by choice for reasons that don't become clear until you get further into the story, determined to not let anyone get beyond the walls he has erected around himself. Jonah has some horrible secrets he is intent to keep to himself. Devulging those secrets to anyone only means that they will leave him - or so he thinks. Enter Elle, a web designer, who is intrigued by this shy man she meets at the mailboxes in their apartment building, and who lives right above her. She listens to the music coming from his apartment, the piano and the guitar. She begins to engineer those mail meetings, just to catch a glimpse of him. Unbeknownst to her (since this is all told in Elle's POV), Jonah is doing the same thing. They meet. A lot. And one day Jonah says Hi. The story basically takes off from there, with Elle exhibiting some creepy stalker behavior for a moment when she attends a club where she knows Jonah's band will play. Their relationship is off to a rocky start because Jonah won't tell Elle was is haunting him. He doesn't really lie - he just chooses not to answer any questions she poses in regards to who he is. He won't let her in, so to speak.Of course, the fact that they have sex (twice) before even getting to know each other is plain stupid on both their parts. Jonah seems to use sex as an escape, as a means to shut himself off, and Elle is so attracted to him that she stops being rational whenever he touches her. This begs the question if her character is realistic. I don't know that anyone would be so emotionally stunted at 30 that they can't control their sexual urges, against their better judgment. I can buy the first time. The 2nd encounter, not so much. And that's part of why I can only give this book 3 stars. While the plot idea is excellent, the characters' development doesn't keep pace. It's hard to put into words what I felt while reading, but I never really connected with them. And at some point it became predictable. There was no other way to end it. The grand finale of the story should have given me goosebumps and made me tear up, based on the subject matter, but it didn't. I felt disconnected the whole time. The writing is telling me emotions, not making me feel them. It feels stilted on occasion, often too descriptive, and then in other areas doesn't delve deep enough to really make me care about these characters. Even the supporting characters feel flat. JJ annoyed me for a while, but her sudden change didn't make sense to me. I'm marking this as erotica because the sex scenes are explicit. Would I read another book by this author? The answer is YES. While this wasn't the best I've ever read, it also wasn't the worst. I was able to put it down when I had to but the plot did make me want to come back and read it to conclusion. And a word to the editor: This book has too many spelling errors and wrong words. I didn't make a list, but every time I saw one of these errors, it made me wonder if any editing was done by this publisher. A couple of misspelling, I can overlook. Nobody is perfect. Unfortunately, this went beyond a couple. I'm not blaming the author, mind you, as this is the job of the editor. Also, at $7.99 this is priced a bit high for a first offering of an unknown author. Yes, I paid it because I wanted to read the book but similar first books are available on various websites for much less.
Tweet