ARC Review: Bad To The Bone by Nicki Bennett 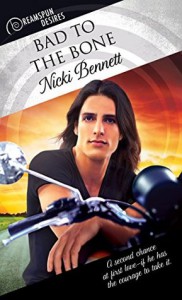 This was for the most part a sweet second-chance romance between two men who were friends in high school and could have been more if it weren't for small town bigots and needing that scholarship.

Back in high school, Alex was going to be a big shot football player at college until an injury put an end to that dream. But that injury didn't happen until he had already lost his heart to Ricky Lee, a boy his age from the wrong side of the tracks, who shared his love of books.

So Ricky Lee left town, and Alex stayed. He's now working at his hardware store he co-owns with his sister, his marriage has failed, and his life hasn't turned out at all how he imagined it would.

And then Ricky Lee comes back into town because of their high school reunion and makes it very clear from the start that he's never forgotten Alex. Ricky Lee now lives in Portland and is some kind of technology genius. He wants Alex and he starts his pursuit from the time he arrives back in town.

This being a Dreamspun Desires title, the plot and happenings inside are deliciously OTT, the characters are slightly too perfect, and the supporting cast is a bit one-dimensional. I liked Alex's sister a whole lot - she seemed to have a good head on her shoulders, and I liked his cop friend as well. I liked Alex and Ricky Lee, and Ricky Lee's somewhat flamboyant friend/business partner.

As the romance gets its second wind, the small town bigots do their very best to try to put a cork in it. This is where the plot leaves realistic territory and veers dramatically into what the hell just happened.

I was entertained, of course, and the scenes where Alex and Ricky Lee are on page together without others are really well done. I believed that they still had feelings for each other after all these years, and that those feelings were easily rekindled into a raging fire.

This is a feel good book. It's an easy read for a day at the beach or curled up in your favorite chair with your favorite beverage. It's not deep, it's not memorable, but it's definitely enjoyable.