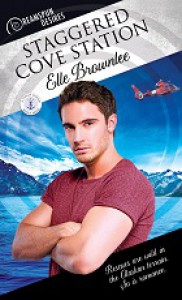 I enjoyed this. It had a nice quiet romance developing, and a big suspense plot that while not super mysterious kept me glued to the pages until its conclusion. I also really loved the many descriptions of the small remote town on the coast of Alaska, the rugged wilderness, the many dangers that come with the unpredictable weather, the rough seas, the tension-filled rescues - it was all vividly depicted within the pages of this book, and I felt as if I was right there with Karl and Dan, the two coasties stationed at Staggered Cove, where one misstep could cost your life or limb.

Dan arrives at the Coast Guard station as the new rescue swimmer, fresh out of California, with the intent to find out what happened to his older brother Neal/Axe who disappeared in the ocean during a rescue mission and is presumed dead. Karl, his roommate and fellow coastie, is quickly suspicious of Dan's odd behavior early on. They become more than colleagues as Dan confesses to what made him sign up for the Coast Guard station in Alaska, and the two begin to try to unravel the mystery.

Speaking of the mystery, it was well done and stayed suspenseful, even though I figured out about halfway through where it was headed. Still, the author surprised me once again when the... no, sorry, you should read this for yourself.

This being a Dreamspun Desires title, I expected the book to have but a couple of explicit scenes, and thus wasn't disappointed. However, the choice of location for the first one - perhaps not the most suitable.

The relationship developed quickly, though considering the stress and strain these men were under, this did not surprise me. There was an obvious attraction early on that kept growing realistically under the circumstances, and I thought that the author did a fine job showing me how these two men grew closer. Intimacy doesn't always mean bare skin, you know. Desperate, frantic kisses and embraces, fueled by adrenaline can also be intimate, as can lying in bed cuddling, talking about nothing.

I have no real experience with Coast Guard processes and procedures, but would say that the descriptions of the same inside this book felt realistic to me, and it appeared as if the author had gone a good deal of research to get it right.

The supporting cast, made up of fellow coasties, the Postmaster/shop-owner in the nearby town, and Dan's old friend Ridge, worked well here - they were sufficiently fleshed out to not be cardboard characters and fit well within the overall story arc.

I definitely liked the two MCs. They were well-suited to each other, with Dan's easy-going nature bringing a bit of light to Karl's somewhat darker mindset, and Karl seemed more mature which in turn calmed Dan.

I would recommend this book, for sure.


** I received a free copy from the publisher in exchange for an honest, unbiased review. **