ARC Review: And The Next Thing You Know... by Chase Taylor Hackett 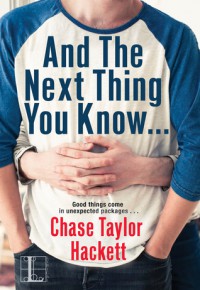 This was freaking AWESOME!!!!

I didn't like Jeffrey (don't call him Jeff) in the first book in this series, because he came across as a pompous ass, and I don't usually have time for the arrogant, cocky, snobby, hot-shot attorney kind of person.

But this book was delicious fun - I had a blast watching Jeffrey get cut to size by Theo.

Let me set the stage, okay?

Jeffrey is best friends and co-workers with Rebecca who is Theo's older sister. This is important information. Theo is currently occupying his sister's fold-out couch, because his douchey sort of boyfriend has maybe found greener pastures.

First scene, Jeffrey, still smarting from the break-up (how dare Roger leave him for Fletcher, the reformed cheater), is supposed to meet Rebecca in a restaurant for lunch and instead finds Theo at the table. Presuming that Rebecca is trying to set him up, Jeffrey informs Theo that, sadly, he's not interested in dating right now, because *sniffles* that break-up is still hurting him, but please don't take it personally, Theo, because surely you're fabulous, really.

Theo, having no idea what Jeffrey is going on about, immediately makes mince-meat of the self-important prick who presumes to know anything about anything.

And thus, their hate-ship is born.

The book is chockful of snark and sarcasm, and the witty back and forth between Jeffrey and Theo had me in stitches. And yet, even through my giggles, I could see a vulnerability in both of them, something they would categorically deny if asked, but simmering just beneath the surface. For all his pompousness, Jeffrey was really hurt by Roger choosing Fletcher, and for all his bravado at 5'6" and skinny, Theo was just hiding behind a mask constructed of his cutting remarks. Jeffrey is also not as cold and calculating as he likes to portray himself, even if Theo doesn't quite see it right away. That thing with the red shoelaces though - total win. And that was only icing on the Jeffrey-is-really-a-marshmallow cake. Because, see, Jeffrey doesn't even realize it himself for a long time - the super cool and collected at all times go-getter lawyer - that's a mask too.

Shenanigans - this book had them. Snappy dialogue, self-deprecating humor, a brilliant use of the enemies-to-lovers trope, this was everything I had hoped for and more.

Well, no, not really, of course, since this is a romance, after all. When Jeffrey realizes the crappy thing was really super crappy and had some really crappy consequences, he actually for once in his life puts someone else first, no matter the consequences to himself. And Jeffrey, spoiled, rich, arrogant little boy Jeffrey grows up and becomes a real man.

Theo too has some growing up to do. He has to learn that being short isn't the same as being helpless, but that sometimes it's okay to lean on others and let them help you. It doesn't make you a lesser person.

I will warn you though - this book isn't politically correct or sensitive to unkind language. The author didn't pull any punches, but also succeeded in making the characters feel more realistic this way. Because, let's face it, we all have unkind thoughts towards others on occasion, that's just human nature.

Additionally, and this is not an issue for me but may be for other readers, there is no on-page steam. While Jeffrey and Theo get it on eventually, those scenes are completely fade-to-black and mentioned only in transition to the next scene. There is plenty of chemistry though, and I had no difficulty believing that their bedroom exploits were as explosive as their hate-ship in the beginning.

The old adage is true after all - there is but a thin line between love and hate, and the opposite of love is not hate, but indifference. Neither MC, despite their protestations, was indifferent to the other, and they went easily from hate to love, without meaning to, without realizing it at first, and without having planned for it. And in the process found in each other exactly that which they never knew they always wanted.

I LOVED this book. Highly recommended.


** I received a free copy from the publisher via Netgalley in exchange for an honest review. **