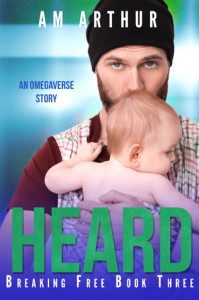 This series just keeps getting better and better.

In this 3rd installment, the main couple is Jax Orris, a widowed omega who was previously mated and has a baby son from that marriage, and Karter Jenks, a young constable who had a supporting role in the previous books.

Karter has recently undergone a change of mind after witnessing Kell Iverson's trial (from book 2) and has opened his eyes to how badly many omegas are treated by alphaholes. He's slowly becoming woke and has started to rebel against his own father's conservative views. He's still relatively young, and fairly new to being a constable, so he's not looking for his mate but fate has other plans.

Jax and his baby managed to escape from an illegal fight ring where he's been held captive since shortly after his husband died. Forced to bulk up with daily protein shakes and workouts, Jax has the appearance and stature of an alpha. Homeless and penniless, he's forced to break in to homes and steal supplies for his baby and himself. And a botched surgery has also left him mute.

Karter is investigating a recent break-in and is shocked to find the young omega is his bondmate. Jax cannot believe he isn't being hauled to jail immediately upon his capture and has no intention of trusting the constable, but also cannot deny the pull he feels toward the man fate intended for him.

I cried a lot. A lot, a lot. When Jax's story comes out, as he tells Karter about his time in captivity, the consequences of losing a fight, the cruel and inhumane treatment he received because of his omega status, his fears for his baby, his willpower to survive, his inner strength - I alternately cried in anger and in joy.

The author writes with so much emotion, and the world she's built is colorful and vivid and horrifying and believable. There are parallels to be drawn to our own society. There are people fighting for equality and there are people pushing these fighters back down, to keep the status quo, to keep the oppressed under their thumbs. It's an interesting comparison to our current political climate where some folks aren't viewed as human beings by those in power, because of the color of their skin, their gender, or their sexual orientation, their country of origin or ancestry. The author created a world in which alphas hold all the power and most of the well-paying jobs, while omegas aren't even guaranteed a driver's license but expected to be the little house-husband, taking care of the kids and their alphahole's every need, including spreading their legs whenever their alpha so desires, and their own wishes and dreams don't matter none to anyone.

These aren't easy books to read. The author doesn't shy away from being explicit in the descriptions of the violence perpetrated by alphas against helpless omegas, but she also shows that it can be different, and that a bond-mated couple can be truly in love and deeply care about each other, and that an alpha who loves his mate is capable of treating his mate with respect and dignity.

The horror is mellowed to some degree by the love that exists between Jax and Karter, Kell and Ronin, and Braun and Tarik. That loves gives hope to others, shows them that they don't have to accept the status quo, and that the fight to make a better world for all is in everyone's best interest and totally worth it. I loved how Jax learned to communicate in sign language, and how Karter tried and tried and tried to win his trust. I loved how Karter grew into his own person in this book, how he moved past his father's views and stood up for himself and his mate and became a better person for it. I loved how supportive Kell and Braun were with Jax, how Tarik and Ronin helped where they could, and how Serge and Dex continued to be awesome friends to them all. The characters are all fully fleshed out and carefully crafted, with realistic and reasonable personalities that all felt authentic and believable.

This was an edge-of-your-seat read from start to finish. Have tissues ready. Wine and chocolate is also useful.

Highly recommended that you read this series. The next book is going to come out soon.