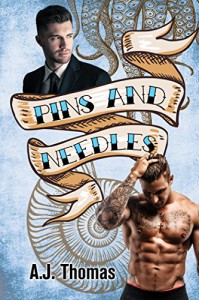 This is only my 2nd book by this author. The title is apt - I was on pins and needles for most of the time while reading this excellent story of suspense, intrigue, and romance among the ruins.

Okay, so that latter part is a bit hyperbole - there are no actual ruins, per se. What is in ruins however is a promising career, a father/son relationship, and an invention that could revolutionize a part of the oil industry.

But I'm getting ahead of myself...

This is a complex story, and it would behoove the reader to read slowly and carefully, much in line with the slow progression of the story. As it is so often the case, all is not what it seems, and it takes some time to untangle the many threads that make up this particular plot.

The book begins by introducing us to Nate Delany, a young lawyer working for his father's well-known company, who is basically the do-boy for another lawyer, and whose briefs, as eloquent and well-researched as they are, are not getting credited to him, but the "supervising" attorney. Nate is frustrated, especially as his father doesn't seem to realize that the brilliant briefs "written by" the supervising attorney are actually his son's work and believes that Nate is just a slacker, unable to run the company himself. At the end of his rope, Nate quits.

On his way out, his assistant gives him the name and number of a man who had an appointment with the supervising attorney, but who was apparently deemed too rough, with too many tattoos, to warrant the jerk's time.

Nate makes a call. Nate makes a visit to the hospital where he meets Sean Wilkinson, whose former foster father Hawk was the man rejected by Nate's father's lawyer. As Nate hears what happened to Sean, he can't help but be intrigued by the young man who after a terrible accident lost not only his leg, but also his livelihood and his career as a petroleum engineer.

Hounded by his employer's lawyers to agree to a ridiculous settlement after the accident, Sean needs someone in his corner to help him navigate these new rough waters. And Nate is just the guy to do that.

Both MCs have their own personal struggles and rather different personality-wise.

Sean, with his difficult early life and rough upbringing, isn't quick to trust anyone and plays his cards rather close to his chest. He's not only a brilliant engineer, but also a fantastic tattoo artist, who learned the craft in his foster father's shop. Hawk is perhaps the closest thing to a real father Sean has, and their relationship is very close and supportive. He doesn't have any close friends; in fact even the people with whom he spent months at sea don't really know him at all, including his boss, with whom Sean has had an affair since he interned with the company at 19.

Nate, on the other hand, had a rather normal, if affluent, childhood and appears to most people as someone who had everything handed to him - with his last name being so well-known and the assumptions which come with that. His personal struggles aren't as obvious, but they're just as real. Nate has to prove himself repeatedly at his father's company, more so really than any other newly minted attorney would have to, because he's his father's son. In addition, his parents have more or less forsaken him because their older son is a bigot and doesn't want his children or his wife anywhere near Nate. Since, you know, homosexuality clearly rubs off and we must think of the children. For years, Nate hasn't been able to spend holidayrs or any quality time with his family; it's as if he's been erased. No photographs of Nate are displayed at their house - it's as if he doesn't even exist. His name isn't ever mentioned around the older son, and his brother's kids have zero relationship with him.

Taking on Sean as his first client after quitting his father's firm seems like a great idea at the time, even if it's just fighting for Sean to get the biggest possible settlement for the accident that cost him one of his legs, but there's a lot more to their case than just that. See, Sean invented something that's been used on the ship, and the case now also involves intellectual property rights.

And someone may be out to kill Sean to silence him.

The romance that develops between Nate and Sean is by design a super slow burn. Not only is Sean seriously injured and still recovering from the accident, but he's also Nate's client, and there are a bunch of ethical issues to consider before the two of them can be together. As an added detriment, when Nate tries to find another law firm to represent Sean and remove the ethics issue, he finds that many firms will not even consider taking him on, because of who Nate's father is. No matter how brightly the attraction burns between them, Nate must first and foremost consider that any romantic relationship they might have could adversely impact Sean's day in court.

Underneath all the suspense and intrigue, the point this book drives home time and again is that of family. Not necessarily the one you're born into, but the one you choose, the one you make for yourself. And for that, Sean had a great example in Hawk, his mother's ex-boyfriend, who took him in, no questions asked, when Sean was kicked out at home for being gay. A man who never asked for anything but was there time and again when Sean needed him. A man who not only gave him a home but also a way of paying the bills, when he taught him the fine art of tattooing. Nate has an example too, really - that of how NOT to treat your family. While I believe his parents loved him, they never even considered how hurtful their behavior was when they excluded Nate to appease their older son's homophobia and bigotry.

My only niggle came toward the end of the book, during the big reveal as to who was behind all the bad things that happened. It felt a little over the top, and the villain really came out of left field, to be honest. Sure, the explanation made sense, but the way it all went down was a little... too much, I guess.

Still, this was definitely an enjoyable read, with a satisfying HFN, and I would recommend you give this book a try. I don't think you'll be disappointed.