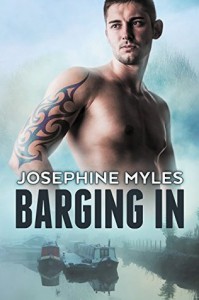 Ah, I just adore Jo Myles' books. They're so very British, and I just love that.

I'd never heard of Narrowboats before this book. I'd no idea that there are people in Britain who live on these skinny boats, slowly moving up and down the rivers and canals through the country-side. I'd no clue that you can rent such a boat for a holiday. Until I googled that, and wow - there's apparently a ton of these boats, no wider than a few feet, on which you can live and cook and sleep.

Robin, one of our MCs, owns such a boat, and he's basically hiding himself away after heartache and heartbreak, unwilling to risk his heart ever again. Love? Pshaw - who needs it?

On the other side, we have Dan, a London-based travel writer and self-proclaimed slut (one-night-stand-Dan), whose latest assignment is writing a story about the Narrowboat culture. He knows not a darn thing about boats, including the one he's rented, which is how he meets Robin.

With her typical British humor, Jo Myles creates a fabulous romance against a background of lazy canals, penniless boaters scraping by, and the ever so beautiful English countryside, where two men, both different and alike in so many ways, literally bump into each other and tentatively, carefully, dare to reach out and learn that what they believed to be true might not be true after all.

With a fabulous supporting cast (other boaters, a land-locked curmudgeon, a randy old geezer, and Robin's errant cat), this book paints a gorgeous picture of what life is like when you live on a boat, and presents you with two imperfect, somewhat damaged MCs who are, beyond their wildest dreams, perfect for each other. Their banter had me in stitches, the sexy times were smoking, and their rather rough road to their love story, no matter how much they might fight their feelings and hurt each other in the process before kissing and making up, made me want to root for them, and in the end left me with a huge smile on my face.

** I received a free copy of this book from the author via Signal Boost Promotions. A positive review was not promised in return. **