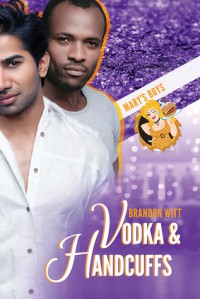 The title of this book, much like the first one in this series, plays on the occupations of the two MCs - one a bartender, the other a cop.

Vahin, the bartender, is Muslim, and from India, and gay, and out, which has caused him to be shunned by his family. Marlon, the cop, is black, also gay, but deep in the closet. His partner on the beat is basically a Jeff Sessions wannabe - a racist, homophobic, xenophobic asshole first class, who thinks he can do what he wants because his daddy is a Senator. He's also universally hated by all, including the Chief, and only assigned to Marlon because the Chief figured it'd be best to pair the asshole with his best cop.

Marlon meets Vahin at Hamburger Mary's, they have a night of drunken fun, mostly off-page, and then shit hits the fan, what with the racist cop partner trying to frame Vahin and arrest him, and Marlon being involuntarily outed, and ... yeah... none of it is pretty. This is not a fluffy book. The blurb is a bit misleading. Okay, maybe a lot misleading. Don't expect a fluffy, easy read.

The only real fun on page is when ManDonna struts her stuff - I flove her! She takes no shit, and she will hand you your balls, and you'll thank her for it.

I didn't quite believe the romance in the time line used, and while we get a HFN, I wasn't sure that things were going to last - perhaps we'll see how that goes in a future installment for this series. I do want them to last, I do. I just have doubts that their still fresh relationship can survive the roadblocks that will continue to be in their way, despite marriage equality, and despite the tide slowly turning in their favor. I want to believe that Denver is a bit more enlightened when it comes to racism, homophobia, and xenophobia.

I think this might have worked a little better for me if the book had been longer and had taken the time to really delve into the issues, and perhaps stretch out the time frame a little bit more. The issues raised here are definitely hot topics, and I was a little disappointed that Marlon's forced coming out, and that loathsome, filthy, evil, little cockroach partner's despicable actions weren't given adequate resolutions. Perhaps that is fitting after all - in today's political climate, what with the current administration in the White House, and the "values" for which they stand, it's certainly possible to look at this and realize that, yeah, there won't be any adequate resolutions to homophobia, xenophobia, and blatant racism, until we've gotten rid of the pestilence in orange that empowered this pond scum to strut around with their ignorant flags and "white power" bullshit.

Kudos to this author for making his main characters non-white. I wish there were more books that did that. There is a message within this book too - as a POC, you have to stand up for yourself every damn day, against hatred, against persecution, against blatant ignorance, and if you're POC and gay, your resilience will be tested time and again in triplicate. I commend the author for touching on these difficult subjects with honesty and sensitivity.

The author also sets up the next book toward the end, which will feature Zachary aka Ariel Merman. I had my heart in my throat while reading that bit, and I need the next book, like, now.

This series is quickly becoming a favorite of mine, and that's primarily due to what it isn't - lighthearted fluff. I want to read books that deal with current affairs, and this one definitely does.