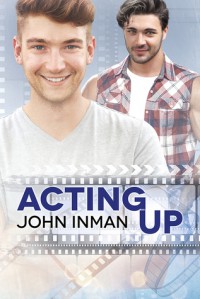 This is the kind of book I expect from John Inman - sweet, funny, with sexy times sprinkled in, about two men falling in love.

Malcolm Fox lives in San Diego with his best friend and roommate, Beth. Both of them are struggling actors who don't have much success in that field, so both have to hold down other jobs to make ends meet. Malcolm has also never been in love, in all of his 26 years, and probably wouldn't know love if it jumped up and bit him in the ass.

Malcolm initially comes across as snarky, shallow, and full of himself, which is even more evident when he addresses the reader directly. I usually don't like that in a book but it worked here for some reason to establish Malcolm's personality as a somewhat neurotic wanna-be actor.

Some friend, huh? Malcolm is freaking out, while Beth isn't very apologetic at all about springing this on him, but then Cory is there, and OMG, he's HAWT, and Malcolm's freak-out starts anew for a different reason.

Cory is super nice and kind, not to mention a really tall glass of water in a barren desert, but, as Beth reminds them, also straight. According to Beth. Poor Malcolm. The object of his arousal, that hot piece of man-meat, isn't gay. But he's nice, oh so nice, and kind, and just the sweetest guy, apologizing for possibly being an imposition, but Malcolm waves it away, and is all, of course you're welcome here, and I'm not scared of your massive dog, and only a little bit of that snake you brought with you, though I'd like the one in your pants, OMG, no, you're straight.

Of course, this wouldn't be a John Inman humorous romance if we didn't have shenanigans, which start immediately with the rats meant for the snake "running off", and Malcolm having wild fantasies about Cory, and suffering this infatuation with the straight guy, and Malcolm's mom, Viv, and the Tarot reading, and Cory's snake escaping the enclosure, and maybe Cory not being as straight as his sister thinks.

Since the entire book is told from Malcolm's first person POV, we don't get a whole lot of direct insight to Cory, and Malcolm isn't a very reliable narrator either, since he is a bit oblivious. Okay, he's a lot oblivious for quite some time, until Cory more or less spells it out for him.

Their romance itself is super easy once it actually begins, other than Malcolm's doubts about what love is (see above about never having been in love), and having to sort of keep it secret from Beth for a bit. This story is basically super light-hearted, super fluffy, snarky-hilarious and not-at-all-serious fun, with an implied HEA - the kind of story that defines John Inman romances for me.

I thoroughly enjoyed reading it, and I think you will too.