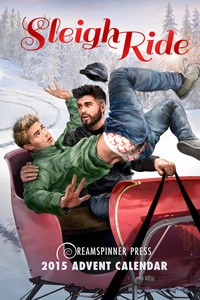 I read 5 of the 31 books in this year's Advent Calendar from DSP, as part of a My Fiction Nook group read/review for all of them.


Book 1 - The Beary Best Holiday Party Ever by B.G. Thomas:

This was nice, written in Ben's usual style, though I didn't like it as much as I usually like his books. The story overall, including the romance, was good, but Ron rubbed me the wrong way for the most part, and Paddy was almost too perfect to be true. Still a solid 3 stars for bears, cubs, and jolly good holiday fun.

Super cute short about a guy getting stuck at the airport flying home for Christmas (Tyler), and the concierge at the Lost And Found desk (Aaron), and a magical connection made via a left-behind Teddy bear. Adorable. 4 stars for Teddy bear adventures, new found friends, and Christmas love beginnings.

Well, this was just adorable and super sexy too. Clumsy Elf Thistle doesn't think he's well-liked at the production shop where he mostly tries to stay out of the way, but he's really good at cooking, baking, and making a home - that's his magic. Bayberry, the supervisor at the production shop, has a bit of a soft spot for Thistle, and then things magically arrange themselves so the two get to spend some time together. The ILYs may come sooner than I would normally like in a romance, but whatever, it's magical. Adorable. 4 twinkling stars for elvish sexy times, baked goods, and a happy home to share.

This was cute, but a little too short for what it tried to do. There was little build-up to the end result, and while I liked Mason, I didn't care much for Cole. Didn't feel to me that he was into Mason as much as he proclaimed he was. Still, 3 stars for burned cookies, a freezing man in underwear, and a shy guy who won't be denied his prize.

A paid assassin, Brick, is shadowing his latest intended victim, Robin, but is confronted with Robin's goodness, which prompts him to dig a little deeper before applying his particular skills. What he finds out puts Robin, and the "kill this guy" contract in a whole new light, and Brick has some soul-deep realizations. I liked this quite a bit, and the author did a good job to flesh out his characters in this short story. Both of them come from group homes, though there's nothing about their real parents in this book, but while Robin has the good fortune of being adopted, Brick only experienced pain, loss, and loneliness, until the Army turned him into a proficient killing machine. He has long ago turned off his emotions, and it's only because Robin's persistence shakes him into a new awareness that Brick realizes he doesn't have to live this way. Of course, it's a bit unrealistic, because I suspect that killers for hire don't get to just walk away from their jobs, and the solution to this particular contract is a bit simplistic but whatever, it's Christmas, and we'll chalk the non-realism off to that. 4 stars for hot boysecksing, a killer with a conscience, and a victim who won't go quietly into the night.


Read all our reviews in the combined post on link: My Fiction Nook.

Copies of the books were provided for free by the publisher. Positive reviews were not promised in return.