Love And The Real Boy by JK Hogan 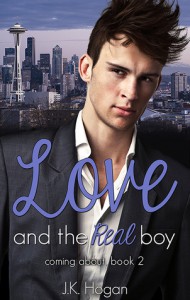 I read this twice, by the way, and savored it the 2nd time around.

Love And The Real Boy is Rich's story. If you read the first book (I Survived Seattle), you'll remember Rich as Rory's friend/roommate who lashed out at Justice repeatedly and eventually outed the poor man. Needless to say, I didn't have much sympathy for Rich after the first book, and went into this one wondering how JK Hogan would redeem him.

The book starts out with Ricky, barely 13, and trying to save his brother John-Michael from his drunken, drug-addicted mother's boyfriend. Clearly the author is not pulling any punches - setting up her readers to immediately feel sorry for the kids. After a few years in foster care, Ricky's brother is adopted, and Ricky eventually ages out of the system.

Rich is born. Rich keeps the anger and hurt and pain tightly locked up within himself. He works his way up to Junior executive of a marketing firm. He uses his designer suits as an armor. He keeps his personal life, including his sexuality, completely to himself. He knows he's gay, but he doesn't feel that this is anyone's business, and nobody needs to know. He hides in a closet much like Justice did, if for different reasons. All he's known his life is loss, and he works hard to not lose again. Ever. Opening himself up to a relationship can only means future loss, so he avoids them at all cost.

And finds Rory on his doorstep. I liked that the author gave us a bit of background on just how Rich and Rory became friends and rooommates, including a scene where Rich figures out what's making Rory so sick all the time. She cemented the reason for their close relationship in that scene, and suddenly Rich's actions in book 1 became, if not excusable, at least understandable.

Rich projects all his longing for family on Rory, and believes he might be in love with the straight man, a love that will never see fruition, but if he can't have him as a lover, he will keep him as a best/good friend, which is what Justice threatened when he came into town for Rory's wedding. Which explains, but not justifies, Rich's behavior.

But Rory is married now, Justice has found love with Nic, and Rich needs to make amends for his terrible behavior. A suitable punishment is helping Justice and Rory work with Patrick O'Dowd to restore Nic's boat to its former glory as a wedding present from Justice to Nic.

I loved Patrick. A big, burly Irishman, with a lovely brogue and a good head on his shoulders, he was just the kind of man to pull Rich out from behind the walls he'd built all around himself. He saw the grieving child who only wanted to be safe, and provided that safety in his arms.

Their relationship is hot and heavy from the start, neither interesting in much more than a hard fuck, but it was also clear that both felt more than they were letting on.

Rich has demons to grapple with. The author did a fantastic job showing just what Rich has endured, what fears still plague him, and where his breaking point is. There were many moments in this book when my eyes filled with tears, and I clutched my Nook tightly, if only to sniffle through the scenes that unfold and smile when Rich finds that what has eluded him all his life - a family.

The O'Dowd clan was awesome, a big, loud, loving family, and they engulfed Rich in their midst without a second thought. But Patrick also carries his own demons, about a tragic accident and the fallout from it with not only his own guilt but also his brother Aidan's anger and grief.

Both men have these issues to work through, though I thought that the author did a much better job with Rich than with Patrick, and that Patrick's issue perhaps wasn't handled as well as it could have been.

Rich, though - you see him growing right before your eyes, and it's a sight to behold. His dream of a family of his own becomes reality, and Rich becomes a different man.

The book is well-written. It flows well, and any time jumps are seamlessly built in. The steamy scenes are holy hot boysecks, Batman, but with each one it is clear that the underlying emotions are right there in the words.

While this can certainly be read as a standalone, I would suggest that you read the books in this series in order.